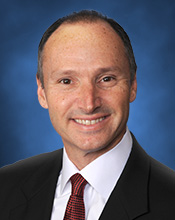 Dr. Mark Block has practiced general thoracic surgery since completing his residency in cardiothoracic surgery at Barnes Hospital in St. Louis in 1997. He received his undergraduate and medical degrees from Yale University and completed his general surgery residency at the University of Chicago. He also received fellowship training in surgical oncology at the National Cancer Institute.

Before coming to Memorial Healthcare System, Dr. Block practiced general thoracic surgery as an assistant professor of surgery at the University of California, San Francisco, and then at the Medical University of South Carolina, where he was also the director of the Thoracic Oncology Working Group.

American Board of Thoracic Surgery-Thoracic and Cardiac Surgery